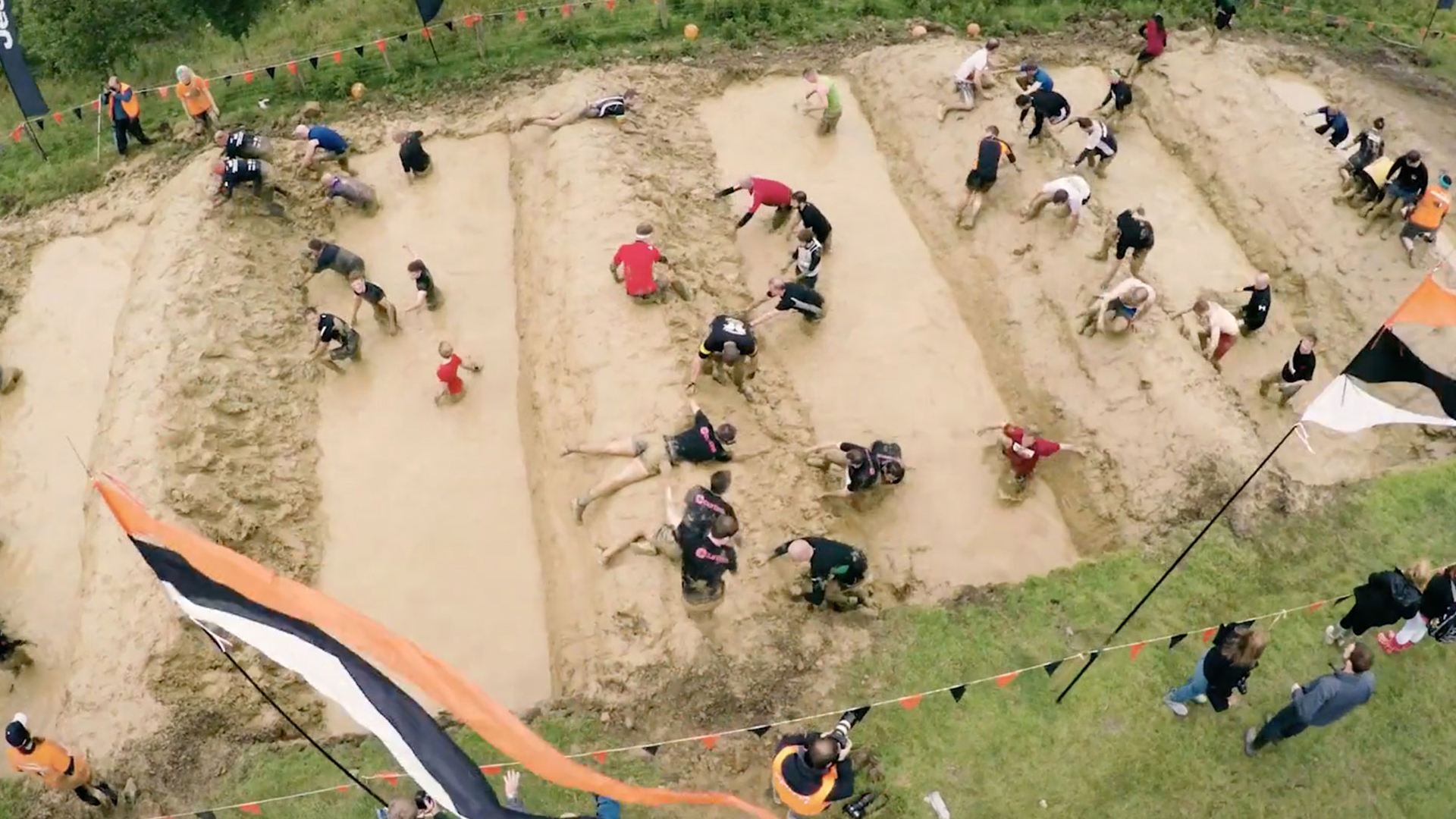 SUFFERING FOR YOUR ART

If you want to produce truly outstanding sports films, you have to be prepared to sweat, sometimes bleed for your shots.
Over the past 12 months we’ve shot a lot of the UK’s biggest obstacle races – from Tough Mudder, with its vicious electric shocks to Dirty Weekend, with its cloud-scraping hay bale mountains. And at every event we’ve had to learn valuable lessons on the hoof to ensure we came back with outstanding footage for our clients. Here are keys to success:
1) Be prepared to run.
If you’re following a team during one of these races, you need a member of the production crew who literally runs with them. It’s hard to do this with anything other than a GoPro and risky unless you don’t believe the manufacturer’s claims that their 50K camera can’t cope with mud.
2) Know the course.
Race maps are deceiving at the best of times. That’s why it’s important to do a reccy the day before so you physically know where things are. Having an off-road vehicle to get from obstacle to obstacle is also vital when you’re shooting courses longer than 5K.
3) Don’t expect racers to repeat things.
Unlike in a studio where you can get actors to re-read lines or repeat actions, racers are normally not happy to receive electric shocks or dive head first into pools of ice repeatedly, just so you can get a clip of their hilarious fails. That means you need to get the shot right the first time, and is why, during the reccy, you should rehearse complicated ones with production staff standing in for racers.
4) Watch out.
During Rat Race’s Dirty Weekend, one of our camera ops positioned themselves under an obstacle that looked a bit like a giant bobbing phallus, with racers having to climb some two metres up and down it as it pitched back and forward. One rather rotund racer was bucked off and ended up landing on our filmer, almost trashing his camera in the process. From that moment on we’ve made a point of keeping all of our guys out of falling racer range – there’s no point getting an epic close-up if your camera gets kiboshed in the process.
5) Watch out some more.
While filming a obstacle course short for Sony, another of our guys was following a team of racers while holding a camera mounted to an unwieldy gimbal. He failed to see a rather large tree branch ahead of him and went head over heels, landing on the floor in front of the camera and unleashing some of the fruitiest language we’ve caught on film. The footage was outstanding but unfortunately not of the right people falling over. Pride is now kept intact all round with a spotter for each shooter.
Want to see an obstacle race film we shot where we applied all these painfully
learned lessons? Check this out.